Im very excited to be in Las Vegas getting ready to do my workshop on  secrets of the cerebellum. This is a photo at the top of the stratosphere hotel. Its about 10pm USA time, so about 4am UK time, just the time I normally climb 900ft up a building! 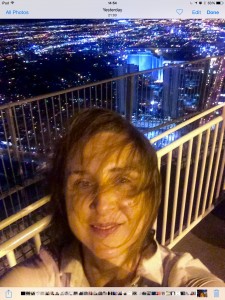 So why train the cerebellum?

The main jobs of the cerebellum and the important processes it is in charge of  are described below.

There are 3 parts to the cerbellum

Intermediate cerebellum – This controls proximal limbs such as hips and shoulders, this area is involveed in coordination

Lateral cerbellum – This controls distal joints such as fingers, toes, hands and feet. The lateral part plays a big role in congition and learning as well as imagination and visualisation of movement

Vestibulo-cerebellum or flocculus. This is a whole piece of cerebellum that is intimately related to the balance system in the body, the vestibular system.

A quick way to exercise the mid cerebellum would be diagonal eye movements up and left for left CB up and right for right CB.

For the intermediate some hip circles or shoulder circles, it has to be a novel movement or a complex movememts, up and down is no good!

For the lateral, some finger figure of 8s, with eyes closed so you can imagine the movement.

For the vestibulo-cerebellum. VOR – look at a target. Keep your eyes on the target, turn head left for left CB, eyes stay on target, to the right for right CB.

Try these at home, do you notice a different left and right