2. Swan Extensions stimulate the cerebellum, which is the little brain behind the brain. The cerebellum is key to accuracy, balance and coordination for all movements in the body, so this includes speech and eye movements. The sympathetic nervous system (fight or flight) ‘lives’ in the thoracic spine so keeping the thoracic spine mobile will not only help posture, but will affect the sympathetic nervous system as well.

3. Leg circles Any complicated non-linear movements of the hips or shoulders are great for stimulating the intermediate part of the cerebellum as it has to continuously adjust and modulate the circular movement, this a good thing! The cerebellum is stimulated by novel movements as well, so doing a leg figure of 8 or changing the speed of the leg circles will provide extra stimulation. The the nervous system loves novelty and complexity. 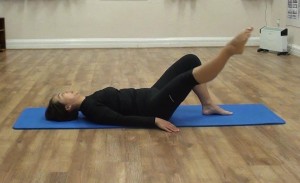 4. Book openings or side lying open doors, this is a neurological field day and deserves a blog to itself!
If you focus on your thumb while you move your arm and head together, this is called a VOR-C (cancellation of the VOR, which is the vestibuloocular reflex) The brain has to resist the temptation to do a VOR, so it overrides a reflex which is good for training the frontal lobe and teaching the brain to resist temptations and urges. Also being able to focus on your thumb, move your head and not get distracted or dizzy by the background is very useful skill and good for rehabbing some types of vertigo.

5. Side bends ( lateral flexion) again deserves a whole blog post . Doing a side bend perfectly is pretty tricky. I find people have the most trouble doing side bends and rotations. As I say ‘Getting good at side bending should automatically improve your back and forward bends’
What’s the deal with side bends anyway?
The act of side bending the head is neurologically challenging for the brain and eyes, as it requires good balanced vestibular, visual and cerebellar function, something which needs to be trained or rehabilitated. Often people will lean over into the bad vestibular system side. Like I said the vestibular systems job is to keep you upright, so if one side is being lazy the posture will be affected on that side.

Having one side of the brain more active or dominant than the other (hemisphericity), will of result in imbalances in muscle tone, strength and flexibility. So the left and right sides of a person can be like Arthur and Martha before they even start moving , so any sort of side bending activity is going to be challenging.
Just moving the head recruits a whole host of reflexes, neurological pathways and cranial nerves. The biomechanics of spinal movements involved in doing a side bend are pretty complicated too. Doing a sidebend involves rotation, translation and tilting of the vertebra, not just than just bending over to the side.